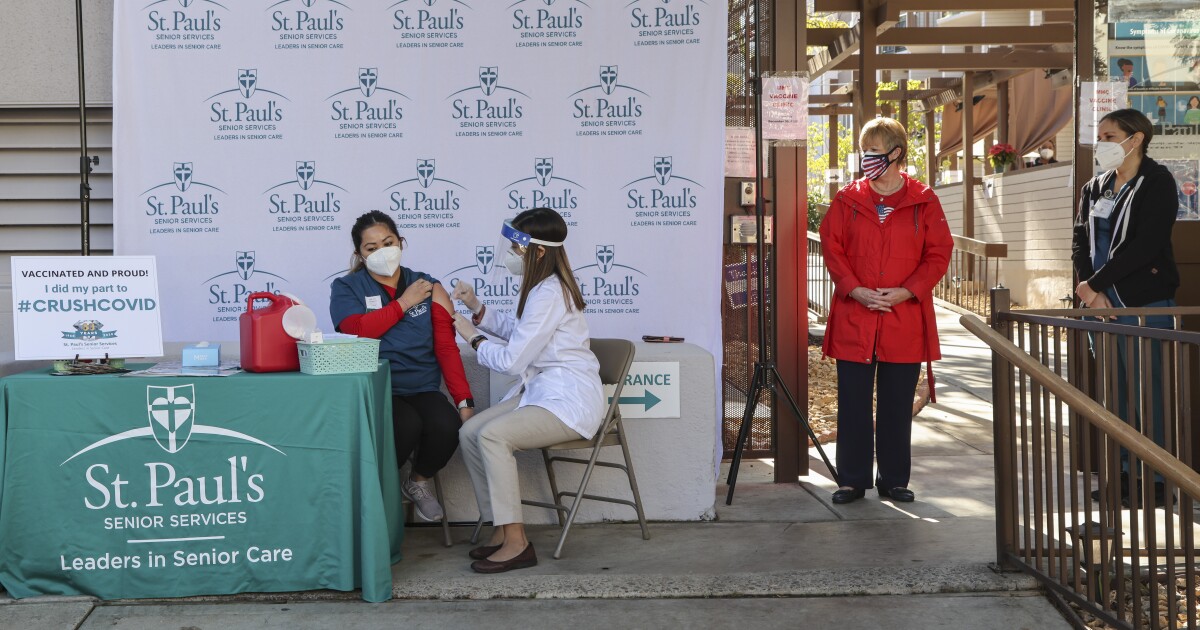 According to the Centers for Medicare and Medicaid Services, only five San Diego County nursing homes had fully immunized staff as of September 5.

In early August, the California Department of Public Health released a letter all facilities demanding that healthcare workers, including those in skilled nursing facilities, be fully immunized against COVID-19 by September 30.

While exemptions are allowed for people with qualifying medical reasons and, in some cases, religious beliefs, the warrant is an attempt to thwart the spread of the novel coronavirus and its highly transmissible Delta variant among the most vulnerable residents of the state.

Vi of La Jolla Village skilled nursing facility, one of those who hit the target earlier than expected, led the industry locally this spring when he announced he would soon demand that all employees are vaccinated against COVID-19.

University City Independent Living and Continuing Care facility informed staff in May that it will be implementing a mandatory vaccination policy – effective August 1 – for all staff, including those at its care facility. qualified nurses. At the time of the announcement, 76% of community staff had already been voluntarily vaccinated, CEO Stéphanie Boudreau said via email.

After the announcement, they embarked on a campaign to educate their community about the vaccine and organized on-site clinics to make it easier for employees to receive their vaccines.

Although 3.5 percent of community staff left after deciding not to get the vaccine, the outbreak was successful.

“Fortunately, the majority of our staff understood the importance of getting vaccinated to protect our residents, who are among the category of individuals most vulnerable to serious illness if they develop COVID-19,” Boudreau said. .

The facility also has one of the lowest cumulative infection rates, with just 15 cases among residents since the start of the pandemic, according to data from the California Department of Public Health.

With the deadline to vaccinate all healthcare workers in California looming, some facilities are still lagging behind the state average. San Diego County skilled nursing facilities have a combined maximum capacity of 8,805 beds, and for each resident, staff are required by the state to provide 3.2 hours of nursing care each day, according to the Department of Justice.

The least vaccinated nursing home was Hillcrest Heights Healthcare Center, with just 65.8% of its staff vaccinated as of September 5.

Vaccination of residents and nursing home staff at the start of the year was a game-changer for local facilities, which had experienced spikes in infections and epidemics during the holiday season.

Prior to the vaccines, residents of the Birch Patrick Skilled Nursing Facility were strictly locked down, unable to participate in group activities or receive visits from friends and family. But that changed as more and more people received their injections.

“Getting a vaccine is really our way out of this pandemic – to prevent the spread, to prevent variants from forming, (the solution) is really to get the vaccine. This is very important, ”said Cindy Stuart, Director of Restorative Care at Birch Patrick.

Birch Patrick, which is operated by Sharp Chula Vista Medical Center, did not have a fully vaccinated staff at the start of the month, but nearly all of its 125 staff will be considered fully vaccinated when the state’s tenure comes in. place Thursday. No staff member resigned instead of being vaccinated.

Only one of the facility’s employees has received approval for a medical exemption, said Laurie Godfrey, director of restorative and nursing care. There is also a part-time employee who works every other weekend and did not complete their immunization regimen on time. Now that they have received their vaccine, they will be put on leave for two weeks until they are considered fully immunized.

“We are so grateful that our employees have recognized the importance of getting vaccinated for their own health and for the health of our high-risk patient population working in a skilled nursing facility,” said Godfrey.

St. Paul’s McColl Health Center in Bankers Hill has a fully immunized resident population and had a staff immunization rate of 89.5% as of September 5, according to CMS data.

On Tuesday, director of operations Ellen Schmeding said there were still seven nursing home staff who were in the process of being vaccinated, but she doesn’t expect this to have a impact on staffing levels and patient care Thursday.

St. Paul’s is also preparing to roll out its booster injection program next week for residents and staff.

The Centers for Disease Control and Prevention will not partner with CVS and Walgreens to vaccinate residents and nursing home staff, as they did earlier this year.

Instead, Schmeding said, nurses at St. Paul went through the county’s vaccinator training program, qualifying them to administer vaccines. As a backup, St. Paul’s has partnered with Skilled Nursing Pharmacy or will work with its own PACE program to dispense injections as needed.